Theyyam Theyyattam or Thira is a popular Hindu ritual form of worship of North Malabar in Kerala state, India, predominant in the Kolathunadu area (consisting of present-day Kasargod, Kannur Districts, Mananthavady Taluk of Wayanad and Vadakara & Koyilandy Taluks of Kozhikode of Kerala state. As a living cult with several thousand-year-old traditions, rituals and customs, it embraces almost all the castes and classes of the Hindu religion in this region. The performers of Theyyam belong to the lower class community, and have an important position in Theyyam. 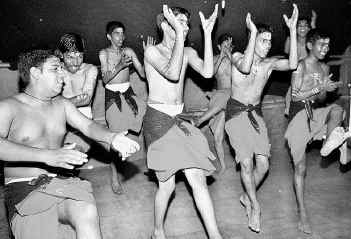 Poorakkali is a traditional dance ritual performed by men during the nine-day Pooram festival in Bhagavathy temples across North Malabar in Kerala State of south India. The Pooram festival begins with the Karthika asterism and concludes with the Pooram asterism of the month of Meenam according to the Malayalam calendar to honour Kamadeva, the god of love.The Poorakkali dance itself is performed by a troop of young men decked in lion costumes around a huge, multi-tiered, lit lamp, also known as a "nilavilukku." The dance involves masculine movements and acrobatic, martial art steps 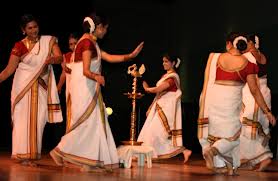 Thiruvathira is a Hindu festival celebrated in the southern Indian state of Kerala on the full moon day of the month of Dhanu (December or January). The festival commemorates the death of Kamadeva, the Hindu god of love. It is believed that on this day, the Goddess Parvathi finally met Lord Siva after her long penance.This festival is also called the festival of women, because women will fast on this day to get good husbands. Thiruvathirakali is a dance form performed by women on the day of Thiruvathira. 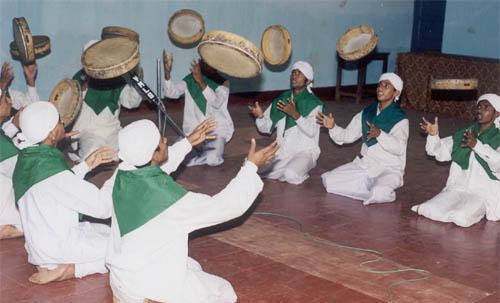 Duffmuttu (also: Dubhmuttu) is an art form prevalent among Muslims in Kerala state of south India using the traditional duff, or daf, also called Thappitta. Participants dance to the rhythm as they beat the duff. The tradition method of playing this is by standing in a u shape, then singing byth i.e. the traditional Arabic song and then playing according to the song, and the modern way is by singing any Islamic song and then adding steps according to the song, then playing the duff. The method is similar but slightly different to that performed in Saudi Arabia and in almost all of Gulf Arab countries. 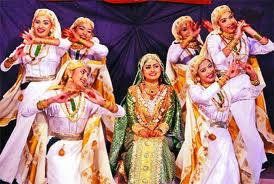 Oppana is a popular form of social entertainment among the Mappila community of Kerala, south India, prevalent all over, especially in Malabar. Oppana is generally presented by females, numbering about fifteen including musicians, on a wedding day. The bride dressed in all finery, covered with gold ornaments and her palms and feet adorned with an intricately woven pattern of mylanchi (henna), sits amidst the circle of dancers. She is the chief spectator sitting on a peetam (chair), around which the singing and dancing take place. While they sing, they clap their hands rhythmically and move around the bride using simple steps with song. 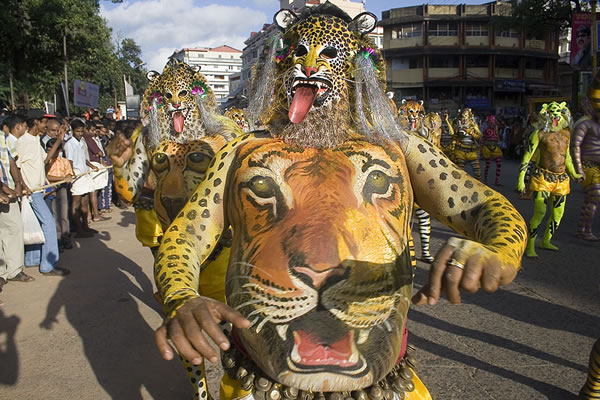 Puli Kali also known as Kaduvakali is a colorful recreational folk art from the state of Kerala. It is performed by trained artists to entertain people on the occasion of Onam, an annual harvest festival, celebrated mainly in the Indian state of Kerala. On the fourth day of Onam celebrations (Nalaam Onam), performers painted like tigers and hunters in bright yellow, red, and black dance to the beats of instruments like Udukku and Thakil. Literal meaning of Pulikali is the 'play of the tigers' hence the performance revolve around the theme of tiger hunting. The folk art is mainly practiced in Thrissur district of Kerala. 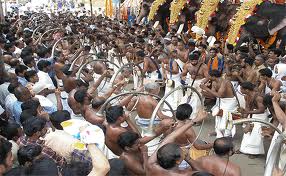 Panchavadyam, literally meaning an orchestra of five instruments, is basically a temple art form that has evolved in Kerala. Of the five instruments, four -- timila, maddalam, ilathalam and idakka -- belong to the percussion category, while the fifth one, kombu, is a wind instrument.Much like any chenda melam, panchavadyam too is characterised by a pyramid-like rhythmic structure—with a constantly increasing tempo coupled with a proportional decrease in the number of beats in cycles. However, in contrast to a chenda melam, panchavadyam uses different instruments (though ilathalam and kompu are common to both) 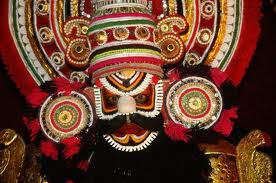 Yakshagana is a musical theater popular in the coastal and Malenadu regions of Karnataka, India. Yakshagana is the recent (200 years) scholastic name for what are known as daśāvatāra believed to have evolved from pre-classical music and theatre during Bhakti movement.Yakshagana is popular in the districts of Uttara Kannada, Udupi, Dakshina Kannada,and Shimoga of Karnataka and Kasaragod district of Kerala. Yakshagana is gaining popularity in Bangalore since a few years. It has drawn comparisons to the Western tradition of opera. Actors wear costumes and enact various roles. 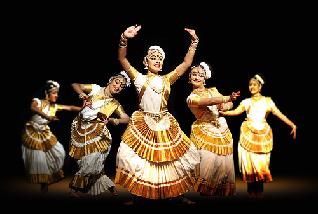 Mohiniyattam, also spelled Mohiniattam is a traditional South Indian dance from Kerala, developed by the Tamil nattuvanar Vadivelu,one of the Thanjavur Quartet.. The term Mohiniyattam comes from the words "Mohini" meaning a woman who enchants onlookers and "aattam" meaning graceful and sensuous body movements. The word "Mohiniyattam" literally means "dance of the enchantress". There are two stories of the Lord Vishnu disguised as a Mohini. In one, he appears as Mohini to lure the asuras away from the amrita obtained during the churning of the palazhi or Ocean of Milk.